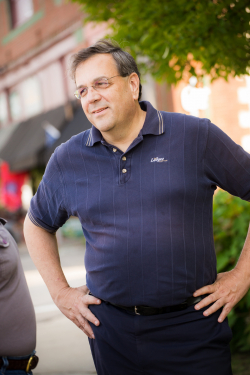 Mark grew up in Kittery, the son of a shipyard worker and a typesetter. He has been a leader in both the Maine House and Senate. He served as District Attorney from 2003-2010 and now has a successful a law practice in South Berwick.

Mark left the legislature in 2002 after serving two terms as Senate President. For the next 16 years, he and his wife Tina focused on raising their two daughters. Although Mark wasn’t leading us from the legislature during those 16 years, he was still a leader especially on environmental issues. He is one of the founding members of the Laudholm Trust in Wells and secured funding for Land’s for Maine’s Future.

Two years ago, the partisan gridlock in Augusta reached critical proportions. Mark knew his positive, proven, leadership was needed in Augusta. He ran for, and won, the District 2 house seat; Eliot, a part of Kittery and a part of So.Berwick.

Mark is now running to represent Senate District 35; Eliot, Kittery, York, Ogunquit, South Berwick and a small part of Berwick. He will continue to champion environmental issues such as land preservation, clean energy and protecting our waterways.

As the father of two daughters in local public schools, he will focus on providing the kind of school programs needed to position Maine’s children to be competitive in the work force, technical schools or universities.

In 2003 Maine voters passed a referendum for Maine to fund 55% of the cost of public education, that has been blocked. Mark will continue to fight to make this happen so that your property tax dollars are not being spent paying for things like school funding when the state is mandated to pay for it.

The working class Kittery of Mark’s youth is no longer that; teachers in our schools and members of our police department can’t afford to live here anymore, and we are losing our diversity. Mark will closely follow the committees in his district that have been formed to address this lack of work force housing and will provide appropriate support from the state level.

Most importantly this experienced leader will be bringing his PROVEN POSITIVE LEADERSHIP TO Augusta.

Mark was a founding member of the Laudholm Land Trust in Wells. He will champion environmental issues such as land preservation, clean energy and protecting our waterways.

Mark will advocate for school programs that will make Maine students competitive in the workforce.

Mark will continue the fight for the right to quality health care for all Mainers.

Mark will work to ensure that Maine Senior citizens can age with dignity in their own homes.